If you ever have a chance to be in Lisbon, put this extraordinary small gem on your itinerary.

The Calouste Gulbenkian Foundation was established in 1956 by the last will and testament of the business man and art collector Calouste Sarkis Gulbenkian. During World War II, he was granted safe haven in Lisbon and, as a token of his gratitude, decided to create a Foundation to house his extensive art collection to benefit the whole of humanity.

Originally, the modernist building complex inaugurated in October 1969 only included the Foundation Headquarters and Museum facilities, surrounded by a harmonious garden. In addition to the areas set aside for administration and services, the headquarters complex includes the Grand Auditorium, temporary exhibition spaces and conference areas. A separate building houses the Calouste Gulbenkian Museum – Founder’s Collection and the Art Library. The three Portuguese architects who designed the Calouste Gulbenkian’s Foundation – Ruy d’Athouguia, Alberto Pessoa and Pedro Cid – envisioned it as an enormous cultural center where the public could flow freely between exhibition spaces. The horizontal complex, built of sober materials, primarily concrete, was classified as National monument in 2010, the first contemporary construction to be classified as heritage in Portugal. In 1983, the Foundation opened a new building – the Modern Collection – designed by the British architect Sir Leslie Martin that displays a collection of modern and contemporary Portuguese art. 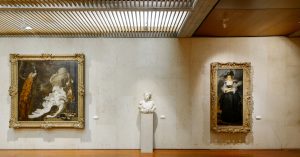 Born in Scutari (now Üsküdar), Istanbul, Gulbenkian (1869-1955) was a passionate art collector and philanthropist of Armenian origin. With his vast cultural background spanning the East and the West, Gulbenkian was, above all, an “architect of projects”, with a vision and sense of balance in the interests prevailing in the first half of the 20th Century. He played a fundamental role as a mediator in the international negotiations leading to the exploration of the first oil reserves in the territories that are now Iraq. Over the course of his life, driven by his personal taste and very selective criteria, he put together a highly eclectic art collection and unique worldwide. He died in 1955, in Lisbon, the city where he spent the later years of his life and where his will stipulated the creation of an international foundation bearing his name and set up for educational, artistic, scientific and philanthropic purposes. 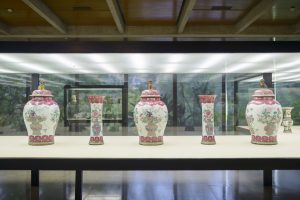 The Founder’s Collection, gathered during Gulbenkian’s life, covers 5,000 years of Western and Eastern history, from Ancient Egypt to Art Nouveau. His motto, “Only the best is good enough for me”, accurately defines the criteria that guided his choices, and the passionate affection he developed for each artwork acquired.

The museum exhibits rare and exquisite art pieces from each period, arranged chronologically across several rooms designed specifically to house them. The journey begins in Ancient Egypt: ceramic and sculpture pieces reveal the most remarkable artistic periods of this civilization, from around 2700 BC to the Roman Era. The Greco-Roman section follows, exhibiting Greek coins and medallions belonging to a treasure found in Egypt (1902), along with Roman statues, silver pieces and glass. 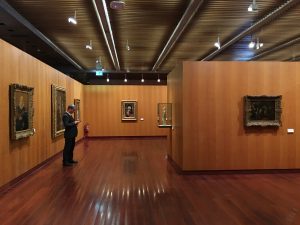 The next rooms are devoted to Islamic arts from Persia, Turkey, Syria, the Caucasus and India, dating from the 12th-18th Centuries. The numerous objects on display include carpets, fabrics, illuminated manuscripts, book bindings, mosque lamps, painted tiles and ceramics, namely from Iznik. The Far East Hall includes delicate Chinese porcelain from the Yuan, Ming and Qing Dynasties, alongside Japanese prints and lacquer work.

A large section of the museum is also dedicated to European sculpture, painting, and decorative arts. The painting collection from the 15th to the 17th centuries gathers works of famous artists like Lochner, Van der Weyden, Bouts, Ghirlandaio, Moroni, Frans Hals, Ruisdael, Rubens and Rembrandt, among others. French artists such as Corot, Millet, Rousseau, Dégas, Renoir or Manet and the English painters Turner and Burne-Jones represent the nineteenth-century painting. 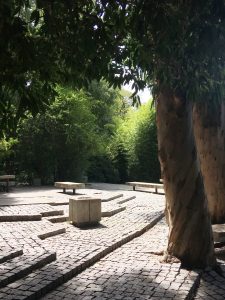 The Gulbenkian Garden, is one of the most emblematic landmarks of the modernist movement in Portugal and a point of reference in the Portuguese landscape architecture. At one of the entrances, visitors can discover the history of the garden at Gonçalo Ribeiro Telles Interpretative Centre, which is named after the architect who designed the garden in the late 1960s and oversaw its renovation in 2002. The landscaping of the garden made use of carefully selected trees, shrubs and flowers making it an exceptional green area in the city centre where visitors may observe wildlife, have a picnic, read a book, or simply relax alongside the lake.

During the spring and summer months, musical performances and film projections take place at the open-air amphitheater, especially the month of August where the museum hosts Jazz em Agosto featuring innovative national and international contemporary jazz musicians from around the world. Cecil Taylor, Sun Ra, Anthony Braxton, John Zorn, the Art Ensemble of Chicago, have performed throughout the years, making this festival the best in the national jazz scene.